How to Unblock a Bathroom Basin 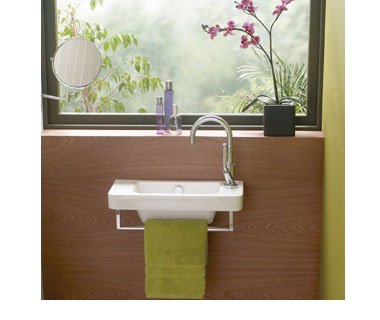 We’ve all felt the frustration that arises when we notice that the water in the sink is also rising at a time that it shouldn’t be.

There are many reasons why a bathroom basin can become blocked, and if you’re facing a slow drain situation, we feel your pain.

While a clogged drain is annoying, it’s often a quick fix that you can tackle yourself. Read on to learn how to unblock a basin and restore normality to your bathroom.

Depending on the size of the blockage, there are a few methods you can try to unclog your basin. Keep in mind that certain basins have different specifications, and so it is important to consult the manufacturer’s guidelines if you’re ever in doubt.

How to unblock a basin using natural products

This method is worth trying if your sink is not completely blocked, but it is draining noticeably slower than it should be.

1. Wait until the water has finally drained away and the basin is empty and dry. Pour one cup of bicarbonate of soda down the drain, followed by two cups of boiling water. Wait 3-5 minutes.

2. Pour down one more cup of bicarbonate of soda, followed by one cup of plain white vinegar. Allow the fizz to emerge (as you let the nostalgia sweep over you, remembering that science project volcano you did at school).

3. Once the bubbles have disappeared, pour two cups of hot water down the drain. After about twenty minutes, check to see if the problem has resolved. If not, move on to the next method.

How to unblock a basin using a plunger

If the bicarbonate of soda method doesn’t clear the drainage, or if your basin is completely blocked, try to plunge away the problem.

1. If your drain has one, remove the pop-up plug or the drain stopper – usually you will just need to twist it out of place. Block off the overflow hole with a cloth to increase suction.

2. Ensure that there is enough water in the basin to cover at least half of the plunger head. If not, add enough so the head of the plunger is half-submerged, but not too much that it’ll cause a big splash.

3. Fit the plunger around the drain and push down, gently at first so it creates a seal. Push up and down repeatedly in a vertical motion at a steady pace. Release the plunger to let out the air, and repeat until the water drains. If it doesn’t drain, move on to the next method.

4. Reach down into the drain (with your rubber gloves on) and, if you can feel that the blockage has loosened upwards, try to remove it.

How to unblock a basin by removing the waste trap 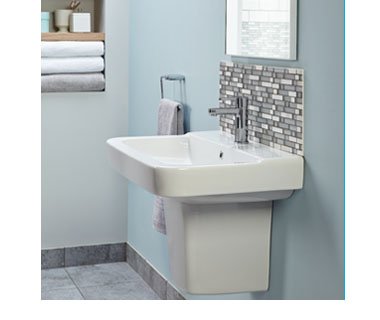 If the natural method doesn’t work, and you have no joy with a plunger, it’s time to take things up a notch and get underneath the sink to remove the waste trap, commonly referred to as the U-bend.

1. Make sure the water is turned off.

2. Place a towel and bucket underneath the basin to catch any water that might drip out once you’ve taken off the waste trap.

3. At the end closest to the basin, carefully loosen the fitting that connects the waste trap to the basin – be ready for any excess water that might drip out. Depending on the design of your waste trap, you may need a wrench or a screwdriver to do this.

4. Undo the other end of the waste trap and pull it free from the basin, careful not to lose any additional fittings (such as rubber seals or washers) that might be in place.

5. Clear the blockage out of the waste trap – you can try to do this by pushing a piece of flexible wire through the pipe to dislodge whatever might be stuck.

6. One you have cleared the blockage, replace the waste fitting and ensure it is completely sealed at both ends. Turn the water back on.

Though it’s not something we ever look forward to dealing with, a blocked basin is a problem that can usually be solved with a few simple household items and a whole lot of persistence. Whether you fizz, plunge or wire the problem away, by following this guide you can have your drain running smoothly again in no time!

Everything You Need to Know to Design a Narrow Bathroom

Brightening Up a Dark Bathroom

10 Tips For Planning A Bathroom

I Want to Know Everything About… Bathroom Radiators

How to Fit a Countertop Basin